Beginning of a new series after an expiry close to 5400 levels... 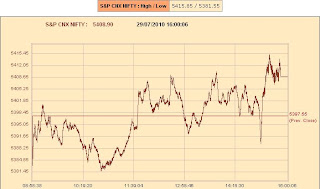 The end of july series came yesterday with Nifty closing a shade above 5400 levels after getting confined to the close resistance and support levels as mentioned in the post.
Now that a new series has begun with a very low historical volatility and also a low implied volatility, the immediate reaction is to look for expansion of volatility for the month. Though this may not happen immediately, there is a possibility of this to happen eventually and would require a closer watch.
How to trade?
Markets can also consolidate between the tight range for a while before making the next move and till there is any sign of a confirmed breakout, it is better to play the range.
Resistance levels : 5422, 5445, 5462

-Happy Trading
www.tripleint.com
Posted by tripleint at 9:05 AM No comments: 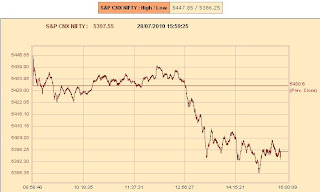 Yesterday markets closed below 5400 levels for the first time in a week.
Option data saw some unwinding in 5400 puts and accumulation in 5400 calls and this points to some mild bearish move for the day to begin with. The OI has remained more than 1 crore in 5300 puts and 5500 calls and markets likely to stay in a tight range closer to 5400 levels.
Today being the derivative expiry day for the July series, market is likely to close the series closer to 5400 levels and is likely to swing between 5369 and 5445 levels for the day, more so getting support at 5387 levels and resistance at 5422 itself.
How to trade?
Longs can be initiated on a test of 5387 levels and lower for a target of 5402.
Resistance levels : 5402, 5422, 5445

-Happy Trading
www.tripleint.com
Posted by tripleint at 8:41 AM No comments: 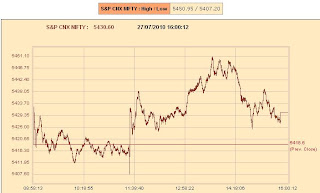 In the alternate tussle between bulls and bears on end of day, bulls were able to close the markets slightly higher yesterday exactly at the first resistance level of 5431.
With two more sessions remaining for the expiry and 5300 puts and 5500 calls still having an open interest of more than 1 crore, it is unlikely for markets to break any of the support or resistance levels.
Any strong one sided move of today is likely to be neutralised by another equally strong move on the opposite side tomorrow and markets likely to remain close to 5400 levels.
How to trade?
The same strategy of initiating shorts at higher resistance levels of 5462 and longs at support levels of 5369.
Resistance levels : 5445, 5462, 5485

-Happy Trading
www.tripleint.com
Posted by tripleint at 8:48 AM No comments:

Bulls and bears to alternate till expiry 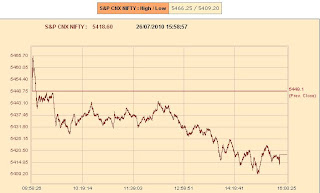 Markets were influenced by bears yesterday inspite of a good opening and as written in the weekly post almost reached the target of 5406 levels.
Options data saw unwinding in 5500 calls and 5400 puts as well and strong open interest is still seen in 5300 puts and 5500 calls. Overall it looks like bulls and bears will alternate each session till this expiry.
How to trade?
It is better to initiate longs on a test of further support of 5369 and initiate shorts at higher levels of 5485.
Resistance levels : 5431, 5445, 5485

-Happy Trading
www.tripleint.com
Posted by tripleint at 8:36 AM No comments: 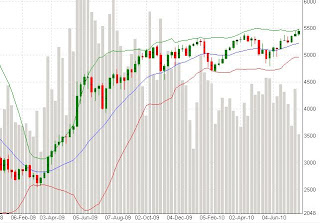 What the markets did last week ?

Last week saw markets reaching the monthly target level of 5462 and also closed strong at 5449 levels, up 1% for the week.
What does the options data indicate ?
Options data saw heavy accumulation in 5500 calls and towards the end of the week the open interest surged in 5300 as well as 5400 puts. Slight unwinding was seen in 5400 calls towards the end. Though this points to bullishness, the open interest in 5500 calls is the highest and so that would act as a very strong ceiling for the week.
What can be expected this week ?
Markets could stay in a range of 5334 to 5507 levels. A move above 5507 levels is not foreseen as of now and markets likely to remain below that for the expiry this thursday.
How to trade for the week?
Markets is getting over stretched at levels of 5485 and above and shorts can be initiated at higher levels for a target of 5406. Also since bulls are likely to give the final push, any move to test range low of 5334 levels longs can be initiated.
Weekly resistance levels : 5462, 5485, 5507

-Happy Trading
www.tripleint.com
Posted by tripleint at 8:34 AM No comments: 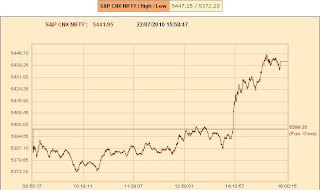 Finally the bullish breakout came yesterday, one day later than expected and markets also closed on a strong note.
Options data saw unwinding in 5400 calls and further accumulation in 5500 calls and more of increase was also seen in 5400 puts.
Markets have reached the monthly target of 5462 levels and it looks like 5500 is a strong ceiling for the markets and is likely to correct from these levels.
How to trade?
A short at higher levels, if market reaches 5485 for a target of 5420.
Resistance levels : 5450, 5462, 5485

-Happy Trading
www.tripleint.com
Posted by tripleint at 9:00 AM No comments:

Market to fall back into range again... 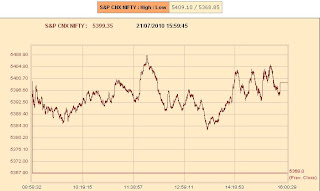 Markets keep oscillating in a tight range and yesterday also markets tested a high of 5410 and closed a shade below 5400 levels.
Options data saw huge increase in open interest in 5500 calls and 5400 calls as well as in 5400 puts. There was unwinding seen in 5300 puts. This points to an initial bearish move for the day, but then a bounce back is expected again in short term back to the levels of 5400.
How to trade?
There might be weakness and a retest of 5350 levels is possible for the day. It is a buy around 5350 levels and a sell on a move above 5400 levels at the moment.
Resistance levels : 5405, 5420, 5442

-Happy Trading
www.tripleint.com
Posted by tripleint at 8:59 AM No comments:

A bullish move to breakout of the range ... 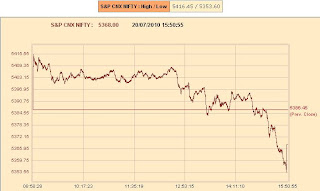 Yesterday markets saw bears taking control towards the end and pushing it down to the range low and the last support level for the day of 5350.
Options data has seen huge accumulation in 5300 puts and today accumulation is seen in 5400 puts as well. With unwinding seen in 5400 calls, today there is a good possibility of a bullish breakout and an up move to test the previous high levels.
How to trade?
It is better to wait for the bullish breakout confirmation and go long above 5420 levels for a target of 5462.
Resistance levels : 5386, 5420, 5462

-Happy Trading
www.tripleint.com
Posted by tripleint at 9:00 AM No comments: 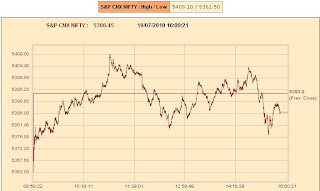 Yesterday markets scaled 5400 levels again and the data was pointing to a breakout to 5450 levels by mid-day, but then the move got suppressed.
Option data saw heavy accumulation both in near strike puts and calls pointing to a directionless move and swings during intraday.
How to trade?
Again it is better to trade the range with longs at support and short at resistance levels.
Resistance levels : 5420, 5442, 5462

-Happy Trading
www.tripleint.com
Posted by tripleint at 8:50 AM No comments: