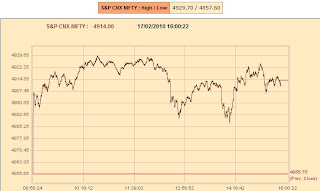 Yesterday markets witnessed the short squeeze move and exactly reached the target of 4930 levels and bears took over. Though the bearish moves towards the end appeared strong, bulls were able to regain 4900 levels and also managed to close above the 20 DMA.
Since the intensity with which the moves happened in the past two days is severe, it is more likely that markets would make further attempt to break away either side rather than consolidation around the 20 DMA (currently at 4883) at this stage and there are more chances of a strong bearish move in the near term.
Resistance levels : 4930, 4953, 4986